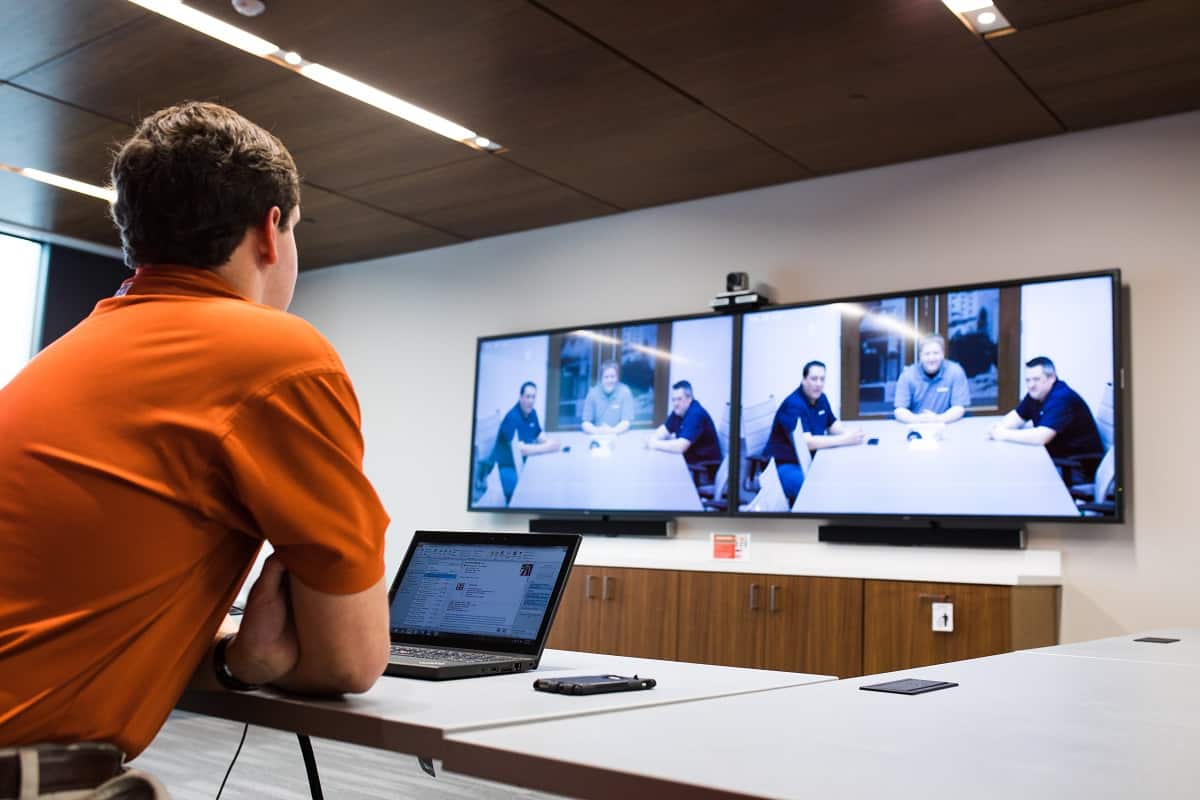 Mission: The Right Tools for the Job

The nature of retail requires companies to adapt to customer needs. In turn, that requires employees who can communicate quickly with one another so they can respond to those needs. For 7-Eleven’s Store Support Center in Irving, Texas, the goal included vastly improved collaboration tools that would empower staff to work efficiently.

“One thing we wanted to do is provide AV technology where people walked in and they said ‘Wow. They’re providing us the right tools to do our jobs,’” says JT Elliott, manager of AV services for 7-Eleven.

7-Eleven is an iconic brand, with 66,000 convenience stores worldwide. From its Store Support Center and over 30 regional offices in the U.S., the company develops new market strategies and supports its franchisees. The company brought in AVI-SPL to design and integrate 100 conference rooms into its new support facility.

AVI-SPL’s involvement began about a year before construction was complete, and included a collaborative design process that involved various teams from 7-Eleven, representing architecture, real estate, AV and IT.

“Being brought in early allowed us to build those relationships and trust with everybody,” says Austin Figueroa, AVI-SPL VP of sales who works out of the Dallas office.

Figueroa and the team took ideas from different business units and tried to consolidate them into as few and simple systems as possible while abiding by 7-Eleven preferences.

“Any input I gave them, they took that to heart and really worked with me and my team to set up the office like we needed it to function,” says Harvey Dewitt, 7-Eleven market manager.

The joint effort led to rooms where the collaboration process would be easy to engage, whether one is working with peers in the same room or reaching them at remote locations across North America. AVI-SPL designers standardized the install on three different types of rooms (about 100 total): Polycom, Skype for Business/Crestron RL2, and Crestron-controlled huddle rooms.

“Whether you’re in a Polycom room or a Skype room, you just press to join the meeting,” says Elliott. “It’s quick and simple and easy.”

The 6,000-square foot auditorium is a three-way divisible room that’s used every day for projects like live sound mixing, video and web conferencing. Every two weeks it’s the hub of all-hands events that are broadcast to 7-Eleven satellite sites. Ceiling- and wall-mounted Vaddio cameras tie back into the Polycom video system and the Skype for Business infrastructure. About 30 ClearOne wireless mics in a variety of styles (handheld, gooseneck, ceiling) provide wide audio coverage, as do dozens of Polycom microphones.

“We have different meetings all the time, different requests, and it has to be flexible” says Elliott. “The ClearOne wireless gives us that flexibility in a microphone system. We can place the microphones anywhere we want to around the room.”

Because 7-Eleven uses NEC in its stores, they supported its integration throughout the campus, including the auditorium. With controls like RS-232, CEC, and LAN, AV staff can control and monitor those displays from the Crestron Fusion platform. Crestron connectivity is also a feature of the Epson projectors, whose high-lumen output is of enormous benefit in the large meeting rooms and auditorium.

Through a combination of bridges and cloud licenses, Polycom drives the video conferencing used in the 7-Eleven Store Support Center and throughout 30-plus corporate sites. Its digital signal processors handle the audio from ceiling mics in large integrated audio rooms as well as the auditorium.

Three Planar video walls include a bezel-free LED wall in the auditorium, and one in the lobby that promotes 7-Eleven and is sometimes used to welcome vendors and guests with personalized messages.

“It shows them that we really value them,” says Elliott.

Likewise, the partnership between AVI-SPL and 7-Eleven thrives because of the mutual respect between its teams, who came together to work as one unit.

“What impressed me most working with AVI-SPL was probably the initial conversation we had with the sales team,” says Elliott. “They saw our vision and weren’t afraid to tell us what was not going to work, what they liked about it. We felt like we were jumping right into a collaboration on the project.”

As the project unfolded, an unexpected problem with a few CAT-5 modular plugs revealed AVI-SPL’s dedication to excellence and a valued client.

“AVI-SPL went back to the rooms that were already installed, and replaced every one of them,” says Elliott. “That was huge for us. That showed us they were on our side.”

More than just an integrator

“They saw our vision and weren’t afraid to tell us what was not going to work, what they liked about it.”

At the 7-Eleven Irving Store Support Center, staff can easily come into a room, connect their laptops and press a single button to collaborate with peers in the same room or on the other side of the country.

Prior to the install, it might have taken half a day to a day to communicate with field operations. Today, 7-Eleven staff look at someone’s calendar, see if they’re available, set up a Skype Meeting, and share content in real time.

“This gives us the ability to be more flexible, more mobile and more fluid in the field,” says Dewitt.

As AVI-SPL integrated solutions, 7-Eleven took note of the first users of the new systems and how they were interacting with them. That led to adjustments to improve the user experience.

“AVI-SPL was right there with us to be able to change these things on the fly,” Elliott says.

The video collaboration solutions are breaking down silos by enabling instant communication and real-time feedback among departments and the 7-Eleven field operations team. From the 30-plus corporate sites, department heads share HD video and documents over the Polycom conferencing system. Using Polycom RealConnect, users can pull up their calendar, pick a time for a meeting, invite their attendees, invite their rooms, and send out one invite.

“For example, it really helps us collaborate between departments by setting up meetings where we can share content with each other and we can address needs and identify opportunities to improve,” says Dewitt. “You walk into a room, you just push one button, and you’re ready to go.”

Dewitt lauded the ability to interact with presenters over the video calls, and the high-resolution quality of the documents that are presented. Better and faster communication with the field consultants has taken the burden off the operations team giving them more time to support the franchisees. Those positive, practical results are what drive the AVI-SPL team in its design and deployment of technology-based solutions.

“AVI-SPL has been more than just an integrator,” says Elliott. “They’ve become a partner of ours. They really value what we want to do as a business. We couldn’t imagine going with another integrator on this. They went above and beyond.”